A few weeks ago, I promised to return to explore Bill Torbert’s radical, useful thinking about fast and slow, speed and substance – and how to use a few seconds of conversation to propel deeply substantive action. Here’s part II of that series. 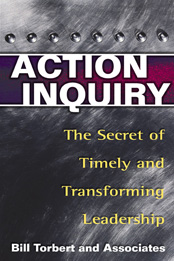 I’ll start with a story well-worth repeating, from the early pages of Torbert’s book, Action Inquiry: The Secret of Timely and Transforming Leadership.

Meet Steve, an expert crew manager in the oil business, currently aboard a large derrick ship in the wintry North Sea. Steve has taken on a new project management challenge for an exacting boss, Cedrick, who has a reputation for being a bit standoffish and consistently beating project timelines. And one afternoon, he finds himself in a situation that may sound uncomfortably familiar.Steve has just put a crew into a diving bell for a 12-hour stretch of deep water construction, and the winds begin to rise. They’re already down, and the risk lies in bringing them back up; enough turbulence in the top 25 feet of water can separate the bell from its winch, and when that happens the men will almost certainly be lost. Weather forecasts are showing it may really start to blow.

Cedrick joins Steve on the ship’s bridge, and says:

“I personally appreciate the fine job you and your boys are doing and I know it’ll continue. I know the weather’s getting up a bit, but we have to complete the flowline connection today to stay ahead, so we need to keep that bell down in the water as long as we can before we let a little ole weather shut us down. I’ve seen the respect those boys have for you and I know they’ll do what you ask.”

Tense with fear from the weather report, Steve’s thoughts churn. He knows the men trust him to bring them back safely. He doesn’t want to hoodwink them into thinking the situation is safer than it is, or that pushing beyond safety is justified. He’s afraid he won’t have the strength or clarity to make the split second call to shut the operation down if the weather gets too threatening, given his big desire to continue with a great project track record and keep his boss happy. 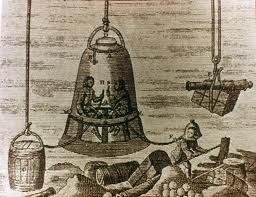 Who hasn’t been there?

I have been on the North Sea, but not on a big, dangerous rig with people’s lives hanging in the balance. I haven’t been in Steve’s exact situation, but I do get his dilemma. I’ve felt that thwarted, stupified feeling that crunches my gut and swallows my mind in blankness. A bunch of competing demands hit you up all at once: weather, values, achievement, instinct, boss, men. I know the mute paralysis that descends, and how icky and disempowering it feels. I also know what it’s like to look back on those moments, and regret what I did or did not do.

Torbert’s point – one of them – is that in complex situations like this, no person or data point is the single right decider. The game is to transform what’s possible by enabling solutions we can’t imagine from where we’re standing.

So how can Steve stay congruent with his values as an honest and ethical man? How can he maintain his team’s confidence by putting their safety first, complete the work productively and efficiently, and keep his boss happy with him?

What Torbert suggests: action plus inquiry

I’ll give you the simple-but-not-easy conversational recipe Torbert offers, but I’m also going to tell you that the richness that brings it to life is in the context he provides around it. So if this approach interests you even a little, you might want to pick up Torbert’s book (or this HBR article about his related work, which is also part of HBR’s 10 leadership must-reads).

As Torbert describes, here’s what that looked like for Steve many months later when he tried it on for size in a workshop setting:

That is conversation as action. It’s a transformational conversational recipe for propelling new possibilities in the moment. And it’s fast.

Scenic turnout: So what happened to the guys in the diving bell?

In case you’re wondering… Steve left the bell down long enough to complete the project, the storm rolled in, and the men didn’t die. But Steve was haunted by the fact he knew they could have. He was deeply disturbed that he’d compromised his own inner sense of what was right, and his experienced feel for the very real danger posed by the storm. Steve believed that key to his own continued leadership lay in honing the capacity to facilitate different solutions when facing complex moments like that one.

So if this is the fast part, here’s the slow part

One key to doing this in the moment is thinking of yourself as a tuning fork that vibrates – sending you some kind of internal signal. That signal comes when you are facing a complexity of competing demands and need to shift from I-must-commit-to-an-answer to action-inquiry mode. Steve overrode his own internal information when he yielded to his boss, and he regretted it terribly afterwards.

For Steve, the interior signal showed up as thought-churning, gut-crunching indecision. For others, it’s a tightness in the throat or chest. (PS: What is it for you?)

Accessing information from our interior selves is a valuable ingredient in creating timely action. This isn’t true just with a co-worker whose opinion you care about, or an authority figure like your boss – it’s also true when you’re in a complex situation with your mother-in-law. (OK, you’re right: your mother-in-law is an authority figure. But you get what I mean.)

It’s takes practice to notice more about your own interior knowing, put words to it and drop it into that recipe, real-time. Think of it as mindfulness at the speed of light.

I’m afraid so. One of the things that intrigues me most about Torbert’s idea is that I see it as a powerful, on-the-ground version of what improvisers do. Improvisers lead incremental co-creation in the face of the unknown. They spend a ton of rehearsal time practicing accepting offers – including being exquisitely attuned to the spontaneous offers in their own minds – without knowing where these will lead. They do this so when they’re up on stage, blinded by spotlights and utterly unclear about how the complex requirements of the story will resolve, they can still take productive action. Not by telling the other actors what needs to happen, but by “yes, and-ing” each other to mutually discover a complex and satisfying scene.

So how can you do it offstage and in the real world?

Of course, you could do worse than to take an improv class. In his book, Torbert offers other great starter suggestions. (I’ll leave you to discover the specifics for yourself.) They’re all different ways of building your awareness muscles, much like the extraordinary work of Pam Weiss and her collaborators at Appropriate Response and other mindfulness superheroes.

Slowing down to speed up

Personally, being able to clearly access interior intelligence in the heat of the moment is a capacity I’m willing to slow down for. I know it will help me speed up later. Conversation as action in the moment. Blink plus depth. Much more potent to think of these as companions to each other, versus something to choose between.

Other thoughts or experiences building this fast-plus-deep capacity? Post ’em.

2 thoughts on “Speed PLUS depth: Action inquiry, leadership that transforms”