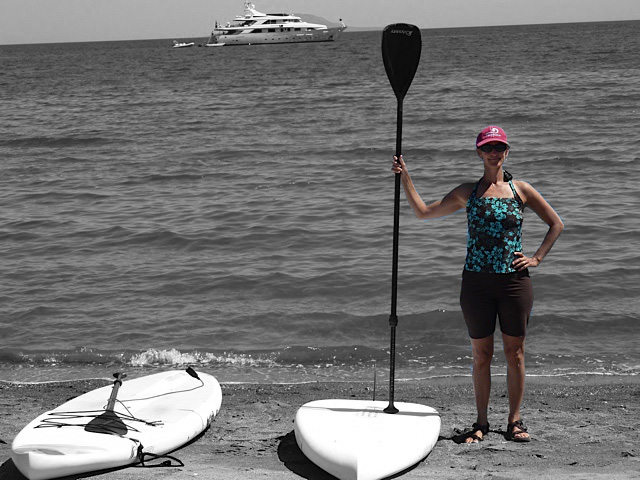 In Part I, I described a situation I was triggered – and stumped – by. Many of you dove into the water to help me out, and your perspectives went well beyond what I could see in the moment. Now: truth is indeed stranger than fiction. Here’s the surprising outcome.

“Do you live here?” I called to the older man as he turned to continue his walk.

He came back a few paces. “Sure do. For a long time, through the ups and downs. I love it here. For a while the hotel had barbed wire around it, all shut down. Now that it’s in good hands, I think we’re going to settle out.”

He gestured to the yacht. “He comes here every once in a while. He really likes it here, apparently.”

I felt myself go wide-eyed.

“You mean that’s…?” My heart was also sinking. I’d never get access to that guy for a chat about his jet ski.

“It sure is. First time he’s brought the yacht. Usually he stays in the hotel. He’s got his people staying there right now.”

After a pause, I asked the man, “What do you think of using a jet ski on the bay?”

“Oh, it’s not allowed,” he said. “Illegal, actually. We’re in the marine preserve here.” He had my full attention. “Yeah, the Federales crack down on stuff like that.” He grinned crookedly. “Someone should just walk through the hotel lobby and say something about it real loud.” He turned and resumed his walk down the beach.

I wanted to kiss him.

There were two men and a woman behind the front desk when I entered the hotel. I walked up to one of the men and spoke politely, but in a voice the others could hear.

“Sir, I’m afraid we have a problem.” He waited for me to continue.

“There’s someone using a jet ski in the bay.” No response, still listening politely. I learned toward him over the counter. “The problem is that it’s illegal.”

The blood drained from all three faces at once as I continued,”We’re part of the marine preserve, no jet skiing allowed. The Federales will come.”

By this time, the two guys were looking anxiously at the woman, who already had her phone off the receiver and was starting to dial.

“Senora, I will just check on a few things,” she said, and I heard her begin speaking in hushed, urgent tones as I left the lobby.

By the time I got back to my books on the beach, the jet ski was no longer in motion, but tethered to the boat. 15 minutes later, the yacht lifted anchor and, swiftly, moved out to sea.

“Probably going outside the protected area so his jet ski-riding teenager won’t throw a fit,” my partner commented.

Taking a broader view
None of us actually know why the jet skiing stopped and the anchor came up, of course. There could have been any number of reasons.

But what I learned was the power of taking a broader view on a conflict – even if you start out taking it personally. As the insightful Kerry Patterson and his buddies describe in their book Crucial Confrontations, when you’re deciding what (the conversation is) and if (you should have it), it’s worth asking what the surrounding social system will support. And we can only understand that by engaging with the social system. You have to talk to the guy on the beach.

Lean in, differentiate, or create from scratch

Once you know, you might find you can lean into expectations and agreements that already exist. Knowing about these informs what you need to say, and to whom, to pursue the results you care about.

And what if you find the  system doesn’t support what you’re hoping for – or, perhaps, that expectations or agreements exist but no one follows them? Then there’s a different conversation waiting for you. You may need to communicate that you’re different from others who haven’t aligned with the agreements in the past. That way, no one is surprised when you uphold them. Or, if no clear expectations exist, you may need to be the one who does the heavy lifting of establishing them.

This beautiful bay will have its own unique journey toward development. In the mean time, thank you for paddling alongside me on mine.

Absolutely, I want to subscribe to Deeper Funner blog posts.