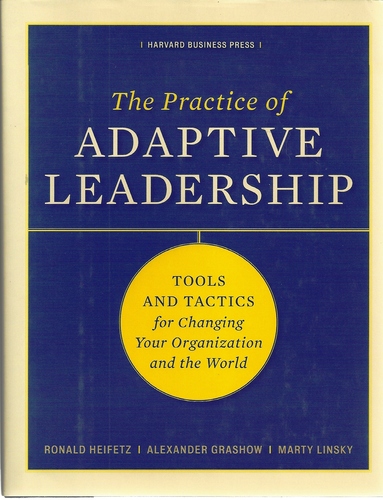 “Leadership: Disrupting your own people at a rate they can stand, for a purpose.” – Alexander Grashow

When was the last time you got to watch someone else do your job? To take a break from your role and learn from watching someone else – ferociously talented – do it?

This week, I did.

I had the enormous gift of spending a day with Alexander Grashow. Alexander and I are both faculty in a two-week leadership program for change leaders in an international non-profit. He opened with a day exploring adaptive leadership. And he lived it, real-time.

Combining the fierce smarts of a management consultant with profound soul that shines through in unexpected and generous ways, Alexander is a co-author, with Ron Heifitz and Marty Linsky, of The Practice of Adaptive Leadership: Tools and Tactics for Changing Your Organization and Your World, and CEO of Cambridge Leadership Associates. He is also one strategic facilitator.

A different perspective on the action

From the back of the room, I did what Alexander and his gang call “going to the balcony.” Going to the balcony is about extricating yourself from the jive and sweat of the dance floor, getting up above it for a big-picture view, and noticing more about what’s happening down there. Getting on the balcony involves going beyond observing to interpreting, and beyond interpreting to actively seeking different ways – beyond your own – of making sense of what you see. Watching for patterns. Reality testing your thinking.

For leaders, going to the balcony is essential for effectively driving adaptive change. You simply can’t see the full picture when you’re down there on the dance floor with everyone, and you don’t have the breathing space to make  sense of it. Leaders go to the balcony by journaling, talking to confidantes, running, taking a hot bath… You might even go to the balcony by pushing your chair two feet back from the table during a meeting. The experience of being slightly apart lets you notice more about what’s happening, and what’s driving it.

In a meta-sense, I went to the balcony as a facilitator by sitting back and watching Alexander facilitate.

The view from the balcony

He let them stay there a while.

Then, he did something quite skillful. Alexander invited participants to go to the balcony with him, and notice more about what was happening right then and there. He challenged them with this question: “Why might you be responding to my invitation this way?”

They had a hard time answering.

“It’s too early for those kinds of conversations,” several said. And others: “I want to be helpful to my colleagues, not harmful.”

On the one hand, fair enough. But here’s a different interpretation. 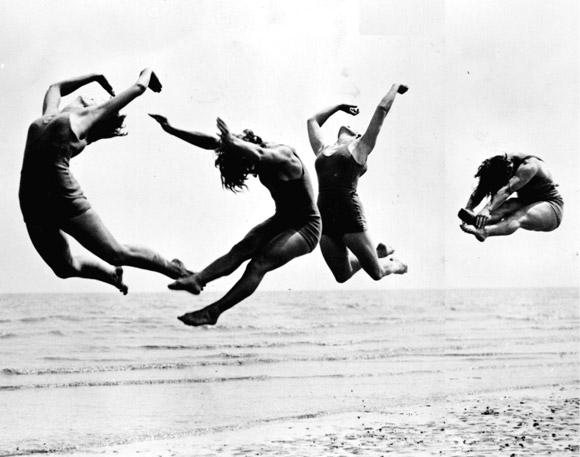 Propelling a group to their learning edge is a form of what Adaptive Leadership calls “productive disequilibrium.” As I’ve written in other posts, the biggest enemy of new ideas and action is history, the status quo. What you’re most likely to think or do, is what you’ve thought or done in the past. If you want to bring something new into being, you must disrupt the crazy-strong pull of the status quo.

What does this mean for leaders leading change? It means their job is to disrupt, and to maintain a state of disruption for a while. The vulnerability and absence of clarity that come with disruption are necessary conditions for experimentation, learning and creation. A leader’s job is to help people get comfortable – but not too comfortable – being uncomfortable.

Too much disruption over too much time sends people back to their caves to grab spears and clubs. Amygdalas get hijacked. The unknown gets too overwhelming, and the creative thinking and collaboration you need for driving change go right out the window.

Disruption at a rate people can stand

How much is too much? Alexander drew the thresholds like this: 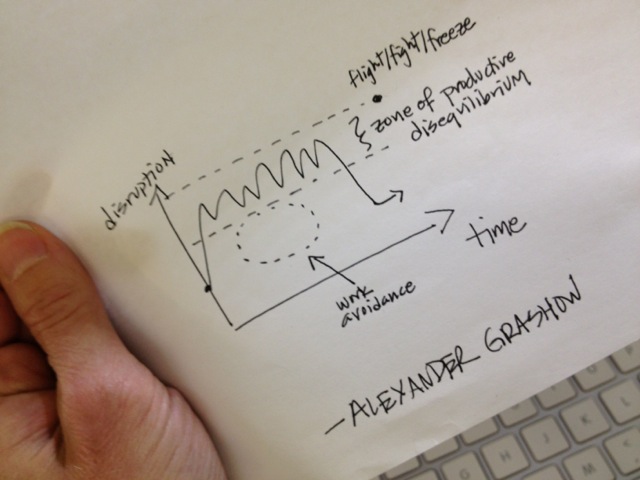 Looking at leadership at the end of apartheid in South Africa through this lens gives it a new twist. Before the end of apartheid in South Africa, Alexander argues, it was DeClerk, not Mandela, who showed the strongest leadership. While Mandela‘s actions were an exact expression of what his followers wanted, it was DeClerk who went to his people and courageously, creatively disrupted their status quo: “You know all that power we’ve had for hundreds of years? We’re going to give it away.” Disrupting the status quo provoked plenty of resistance, but was absolutely necessary to create the conditions for something new to emerge. It was after apartheid ended that Mandela led adaptive change. He created disruption by denying vengeance. “You know what we’re going to do with all those people we’ve felt oppressed by all these years?” he told people. “We’re going to forgive them.”

What the theorists and practitioners of adaptive leadership want us to know: Creation and change happen when you’re outside what you know and are comfortable with. Our job as leaders is to take our teams there and support them to hang out a while so they can give birth to something new, and needed.

Avoiding the work of disruption is easy

We all have favorite methods of dropping back into the familiar so we can avoid this work: Not enough time, too new, too early, don’t want to hurt Tom’s feelings, Jennifer would never go for that, so many other things so many other people need from me right now…

From my perch at the back-of-room balcony, I watched Alexander fiercely and compassionately do what many facilitators struggle to. He supported this group of learning leaders to stay in productive disequilibrium for seven and a half hours. Seven and a half hours! It takes fortitute. I can tell you there was not as much smiling and nice-making as you often see in program launches. Everyone was vulnerable, off-balance, and reaching. If there’d been a mid-day assessment, it might’ve featured low satisfaction ratings and not a small amount of push-back. This day was not for the faint of heart – including for its executive sponsors.

And it was profoundly impactful.

Let’s go back to the moment things started to get uncomfortable: “I want to be helpful to my colleagues, not harmful.”

As Alexander pointed out to the group that morning, the irony is that you aren’t helping your colleagues when you hold back on information that might help them grow and develop. Sharing your interpretation of an experience of them – which, after all, is only one of many possible interpretations – gives them a chance to be more effective next time.

Given the importance of the work you have to do, Alexander maintained, you can’t afford to wait for everyone to get comfortable before you start giving them the benefit of your perspective.

How, he challenged the group, might you get to this point with each other 20% faster?

At the end of the day, the group tackled norm-setting. To get the most value from this two-week program, they asked, what do we need from each other, and ourselves? Their list was a transformational learning junkie’s dream: Observe group dynamics as they arise. Ask each other for feedback. Challenge respectfully, and push to get to the root of the issue. Check in at the close of each day: What did I do to move myself or the group out of their comfort zone? Where did I miss an opportunity to do so? What do I want to try differently tomorrow?

This is just one example of productive disequilibrium, customized for this particular group and the kind of adaptive changes they need to bring about. The question on my mind as I left the room: What adaptive challenge is my next group facing, and how can I create productive disruption in support of it?

Disrupting your own thinking

Here are three specific questions I heard Alexander ask over the day that disrupted my own thinking nicely. See what they do for yours:

A final highlight of the work of adaptive change came from a televised speech, by a leader who has been dancing the fine gray line of disruption, for a purpose:

“We must act, knowing that our work will be imperfect. We must act.” – Barack Obama, inaugural address, January 21, 2013

3 thoughts on “Change leadership: Are you ready to disrupt?”